A new cross-provincial effort by FES and partners aims at contributing to inter-communal dialogue on peace.

In cooperation with the Afghanistan Public Policy Research Organization (APPRO) and Mediothek Afghanistan, FES has started  to organize reoccurring sub-national peace forums in several regional nodes as well as one national forum for peace in Kabul.

The Project "Reaching out for Peace" will engage Afghans “where they are” to identify local and provincial impediments to peace in open dialogues on community-based conflict resolution and transformation. Consistent with experiences of Track 2 and Track 3 in other contexts, events under this project at the sub-national and national levels will create spaces and opportunities for multiple stakeholders to share experiences of conflict and search for a vision of sustainable peace in their immediate communities as well as at the national level. The outcomes of this project will reflect the ideas and perspectives of citizens at the sub-national and national levels regarding the needs for an inclusive and comprehensive peace process and the long-term stability needs in Afghanistan.

By #ReachingOutForPeace, we want to

Throughout a day of discussions in the plenary and small group sessions, the participants described their vision of a post-settlement reality in Kandahar as well as the main obstacles and barriers to peace in their own communities. Many participants emphasized the importance of socio-economic factors like the fight against corruption, and successful struggle against unemployment, injustice, and discrimination. These expectations matched their understanding of what currently impedes their prospects for peace: many named instances of misuse of power by authorities and power brokers accompanied by a weak performance of governmental offices, others pointed to the lack of economic and employment opportunities as a reason for a growing distance in state-society relations. 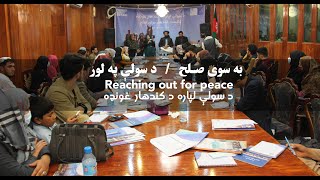 The participants exchanged ideas in group work sessions on how to achieve sustainable peace and long-term stability by addressing local conflicts and discussed their findings during a panel discussion. Many raised the issue that there are not enough equal educational opportunities for citizens. This low quality of education also causes conflicts among ordinary people. Ethnic prejudices and senses of ethnic superiority towards others were also named as reasons for communal conflict. Participants also raised the fact that the lack of the rule of law or equal application of laws created even more inconsistencies. Beyond all, participants saw growing extremism and lack of state control as a significant concern. Participants believed that peace would not be reached in the western region if the state does not consider solving these and other issues seriously and the public does not cooperate efficiently. 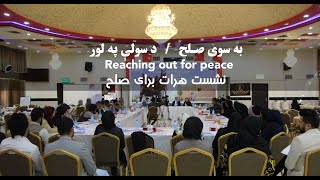 The participants joined the discussion in groups and panels to exchange ideas on significant conflict factors in their communities and their vision for societal transformation after a peace agreement. The working groups addressed four main factors of local conflict: disputes among government authorities, unfair procurement processes for development projects, unfair distribution of political power, and administrative corruption. Participants argued that equitable power distribution in the sub-national authorities and among all ethnic groups helps to form a united nation and a powerful country. They also suggested a decentralized governance system as an option and that digitalization of governmental entities and registration of authorities’ property will decrease corruption. Panelists and participants demanded that national developing projects should be fairly distributed between all provinces. Participants emphasized that long term stability and peaceful society is the key to handle all these conflicts. 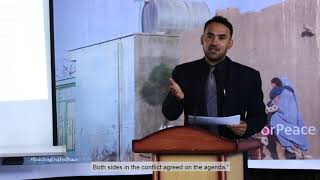